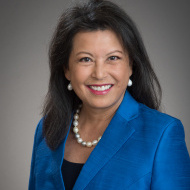 Dr. Summerhays believes it is every leader’s responsibility to mentor and grow future leaders.  She attributes her professional success to mentors throughout her life.  While President of the American Dental Association, one of her priorities was to visit, connect, and inspire dental students at dental schools and student dental organizations throughout the United States.

Currently, Dr. Summerhays is a Councillor for the FDI World Federation of Dentists, Chair of the Board of Councilors of the Ostrow School of Dentistry  at the University of Southern California, a Project Director for Dr. Christensen’s CRA, and consults for several nonprofit and for profit companies.

Dr. Summerhays graduated from the University of San Francisco with a BS in Biology and from the USC Ostrow School of Dentistry with a Doctorate in Dental Surgery. She received a full scholarship to dental school through the Health Professions Scholarship

National recognition for her contributions include the Ellis Island Medal of Honor, National Gold Medal from the Pierre Fauchard Academy, the Lucy Hobbs Award from the American Association of Women Dentists, and inclusion in the Congressional Record of the House of Representatives as President of the American Dental Association (First Filipina).

Other honors include an Honorary Doctor in Humane Letters from the Western University of Health Sciences and participation in international Senior Dental Leaders, Global Child Fund.

From an early age, Dr. Summerhays felt a commitment to improving the community.  Much of that commitment to the involved philanthropic efforts within the profession of dentistry with various foundations and other nonprofits such as the Salvation Army and the American Cancer Society. In 2010, she was honored as “A Woman of Dedication” by the Salvation Army and one of the Girl Scouts “10 Cool Women in San Diego”